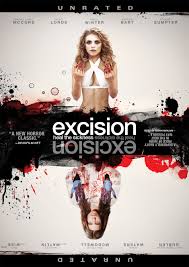 A disturbed and delusional high school student with aspirations of a career in medicine goes to extremes to earn the approval of her controlling mother.

Disturbing and surprisingly nasty, Excision is a perfect blend of gore and teen growing pains. The film centres on Pauline,  a typically (or what it seems) awkward teenager, moving around on the outskirts of high school. At first glance it’s apparent that there is more to Pauline than meets the eye – and you couldn’t be more right. As the film continues on, Pauline becomes more and more delusional in what can only be seen as her desperate need for her mothers approval. Whilst on the outside it seems that Pauline and her mother do not get on, there is a constant underlying issue in that in some way she wants to make her mother proud of her. This eventually heightens in the climax of the movie, where Pauline becomes completely separated from reality and believes herself to be somehow helping her sister by brutally performing surgery, but instead brings to her mothers attention her deeply disturbing mental instability. The mothers desperate scream at the end emphasizes not only the loss of her younger child Grace, but also the loss of the last of Pauline’s stability.

Consistently throughout the film we are given insight into what goes through Pauline’s head with the interjecting of her dreams, increasing more and more in disturbance. Initially starting out with fantasies surrounding blood, the dreams become a lot more frightening (including a highly disturbing abortion sequence), leaving the viewer anticipating and fearing what is to come next.

Overall, the film is a perfect look at teen growing pains, with a completely tragic ending which will stay with you long after the film has ended. The gore continues to hype up beyond your reasoning of normal limits, and therefore is not recommended for the faint hearted.

“Excision is a US comedy-horror with a good reputation. It zings along revoltingly (note its 18 certificate) with a committed performance from Teen Choice darling AnnaLynne McCord (once given the Young Hollywood Award for Superstar of Tomorrow) as the completely demented eldest daughter in a repressed family. McCord’s elfin face has been transformed here with fake heavy eyebrows into something disturbingly simian and her low, uncouth voice provides a really weird sexual charge. She’s so transformed, so thoroughly into the part, the rest of the movie, which is sometimes genuinely bizarre, turns out far too predictable in the end to contain her.” Antonia Quirke, Financial Times.

WordPress.com is excited to announce our newest offering: a course just for beginning bloggers where you’ll learn everything you need to know about blogging from the most trusted experts in the industry. We have helped millions of blogs get up and running, we know what works, and we want you to to know everything we know. This course provides all the fundamental skills and inspiration you need to get your blog started, an interactive community forum, and content updated annually.

Thank you for taking the time to visit my blog.
Here I will be posting reviews and thoughts on films, TV shows, games etc. Hope you enjoy!

The handy place for reviews, for you.